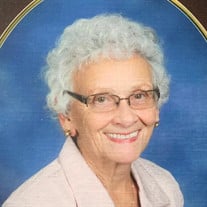 Sally Ann Reid McFarlane Bassett died October 19, 2019 at the home of her courageous daughter some months after a recurrence of cancer. She maintained her independence throughout all but the last months of her 87 year life, which she credited to long walks, Lutheran judgment and stoicism, exercise, and always having washed organic vegetables on which to snack in her refrigerator. She contradicted her own experience by often making double marshmallow Rice- Krispy treats for her grandchildren, Isaiah Wilson-McFarlane, and Aaron Benjamin Wilson-McFarlane. We joked that she would live forever and at the same time was trying to kill us with love, ladies’ aide casseroles, and marshmallows. Sally was a teacher for 41 years, the longest stretch in the Sandusky Schools at Maple Valley Elementary School where she took great pride teaching children to become readers. She was a lifelong member of Beta Tau, a service organization of teachers who focused on literacy and service throughout her life, to which we encourage memorial contributions in lieu of flowers. Sally was a pioneer, a skilled teacher with a master’s degree, who pursued her craft to the benefit of learners. She had two children, Patrick McFarlane, of Orono, Maine and Lesli McFarlane-McCarthy (Kevin McCarthy) of Davenport, Florida. She was born on a farm in Deckerville, Michigan to Freida and Clifford Reid. She attended Concordia College in Illinois and then Eastern Michigan University for graduate school. Her elder sister and brother, Betty Reid-Scott and Walter Reid predeceased her. She was a steady sender of birthday and holiday cards, was renown and beloved as great and/or great-great Aunt Sally to many nieces, nephews and cousins among the children of her siblings, as well as to her adult step children Judy, Jeannie, and Jim Bassett, to whom she took like a pig in a poke, and to whom she fed prodigious holiday meals all in the service of family. She was a life-long a Missouri Synod Lutheran, often mimicking Martin Luther’s list of demands by leaving her own list for those she loved. She lived most of the last part of her life in Naples and then Winter Haven, Florida perches from which she seemed to relish contrasting her weather with those of us in a more northern latitude. She is to be interred with her partner, Evert Bassett at the Christian Memorial Cemetery in Peck, Michigan. A brief service to celebrate her life will be held at the Pomeroy Funeral Home Friday November 1, 2019 at 1pm, with a viewing starting at 11am that morning. Contributions in lieu of flowers may be made to Beta Tau either at the memorial or written to Beta Tau, %Betty Brown, Treasurer, 50 Dell Street Sandusky, Michigan 48471.

Sally Ann Reid McFarlane Bassett died October 19, 2019 at the home of her courageous daughter some months after a recurrence of cancer. She maintained her independence throughout all but the last months of her 87 year life, which she credited... View Obituary & Service Information

The family of Sally Ann Reid McFarlane Bassett created this Life Tributes page to make it easy to share your memories.