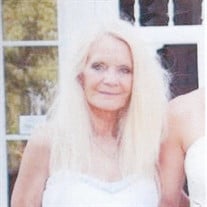 Sally V. Sonnenberg, age 66, born August 30, 1954 to Harold and Velma Chappelle of Alaska, died peacefully on December 13 ,2020 at home surrounded by her children after a long battle with an unforgiving disease. Sally was raised most of her childhood in various parts of Alaska. She and her family later moved to Washington State where she met Micheal Sonneberg. Sally and Michael married on November 4, 1972. Sally is survived by her seven children, sisxteen grandchildren, and 3 great granddaughters and 1 great grans son. Michael and Joann Reeves( Christian) of Athol, Idaho, Michael and Nichole Sonnenberg of Carsonville ( Michael JR, William, Rebecca, Nathan) Jennifer and Ryan Mayle of Port Sanilac ( Emily ,Keegan), Kathleen and Andrew Turner of Port Sanilac ( Logan ,Alaina) Christeen Sonnenberg and Gary Barnes of Lexington (Garrett, Mia, Lucas, Jaxson), Gregory Sonnenberg and Jennifer Sontag of Sandusky ( Haley, Liam ) Christopher Sonnenberg of Port Sanilac ( Cole) and three great granddaughters Chloelynn, Paisley, Laci, grandson Dominic. Sally is also survived by 3 brothers and many nieces and nephews. Sally spent many years driving school bus for Yale Schools and later became a homemaker and a driver’s education teacher. Sally was the epitome of unconditional love, she always put not only her children and grandchildren, but any person in need before herself. Wither it be a place to stay, a meal to eat, or just someone to talk to, Sally was loved by many and loved many even more. Sally was preceded in death by her parents Harold and Velma and Sister Deb. A memorial will be held after the holiday and will be announced then. Memorials can be sent to the family at 757 South Townline RD Sandusky MI 48471

Sally V. Sonnenberg, age 66, born August 30, 1954 to Harold and Velma Chappelle of Alaska, died peacefully on December 13 ,2020 at home surrounded by her children after a long battle with an unforgiving disease. Sally was raised most of her... View Obituary & Service Information

The family of Sally V. Sonnenberg created this Life Tributes page to make it easy to share your memories.

Send flowers to the Sonnenberg family.