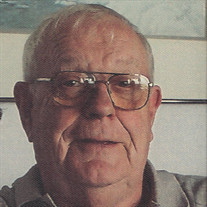 APPLEGATE- Thomas “Tom” J. Foley, age 89, a resident of Applegate and formerly of Southfield , passed away on Monday October 30, 2017 at his residence. He was born on January 14, 1928 in Newberry a son of the late Thomas E. and Ursula (Thompson) Foley. Tom graduated from Newberry High School, he worked on the freighters for a while and then joined the Navy and served on the Navy Aircraft Carrier the USS Princeton CV-37 for two years. Tom then came back to Michigan and attended Lake Superior University and Michigan Tech. Tom married Patricia LaForest on August 26, 1950 in Newberry. Pat preceded him in death on May 29, 2017. Tom was an executive engineer with the Ford Motor Co. from 1950 until 1983, he then worked as director of engineering for the Walbro Corp. until he retired. Tom enjoyed sailing, golfing and watching the freighters and boats on Lake Huron from his home on the lake. He was a devoted member of St. Denis Catholic Church , where he served as an usher and was active in the church. He is survived by five children Thomas M., Peter D., Stephen P., David P. and Margaret A.; 6 grandchildren and 3 great grandchildren; six siblings, Robert Foley, Yvonne Lelli, , James Foley, Trish Wiznerowicz, Timothy Foley and Michael Foley. Several nieces and nephews. Tom was preceded in death by his infant son, Patrick J., his daughter, Mary C. and his sister , Sr. Nadine Foley, O.P. former prioress of the Adrian Dominican Sisters. Memorial Mass will be held at 11 A.M. on Wednesday, November 8, 2017 at Ave Maria Parish-St. Denis Catholic Church in Lexington, with visiting at the church from 10-11 on Wednesday. Fr. Donald J. Eppenbrock will officiate. Inurnment will be in the St. Denis Cemetery. Memorials in memory of Tom may be made to Ave Maria Parish.

The family of Thomas J. Foley created this Life Tributes page to make it easy to share your memories.

Send flowers to the Foley family.