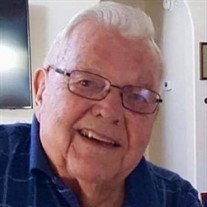 Thomas Edward “Ed” McLane, age 89, of Croswell passed away on Monday, October 26, 2020 at Beaumont Hospital in Royal Oak. He was born Nov. 1, 1930, son of the late J. Glyone and Verna (Amey) McLane. Ed was raised in North Street, on the family homestead, currently property of the Detroit Water Facility. As a child he was very active in 4-H and earned many awards for his cattle. Ed met Anna Lee Todd in 1947, they married on March 31, 1951. He served in the U.S. Army as a Gunner in Germany during the Korean Conflict from November 1951 to October 1953. Ed retired from the City of Croswell in December 1986 as D.P.W. Superintendent. He served on the Croswell Fire Dept. for 25 years, serving 8 years as Chief. Ed was a member of the First Presbyterian Church of Croswell; was a life member of the Croswell American Legion Post #255, as well as the Croswell Eagles Aerie #4465, and the Moose Club. He is survived by his beloved wife of almost 70 years, Ann; son, Dale (Kathy) of Port Austin; daughter, Cheryl (Ken) Carrigan of Tucson, AZ; grandchildren, Michael McLane and Julie McLane,Traci Lisk and family of Colorado Springs, CO, Joshua Lisk and family of Tucson, AZ, and Amy Finnicum and family of Hill AFB, UT; and daughter-in-law, Jane McLane of Croswell. He was preceded in death by his sister, Norma Woods. Visitation will be 2-3 PM Sunday, November 1 at the Croswell American Legion, Post #255, with a Fireman’s Memorial and Military Rites following at 3 PM. A luncheon will follow. In Lieu of flowers, donations may be made to the Croswell American Legion Post #255 or the Croswell Fire Department.

The family of Thomas Edward "Ed" McLane created this Life Tributes page to make it easy to share your memories.

Thomas Edward “Ed” McLane, age 89, of Croswell passed away on...

Send flowers to the McLane family.