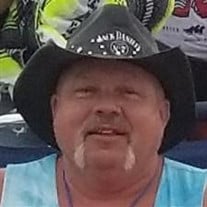 BLOOMINGDALE, MICHIGAN Timothy John Essenmacher, age 54, of Bloomingdale, Michigan passed away unexpectedly on December 29, 2019. He was born on January 5, 1965 in Sandusky, Michigan to Jerome G. and Norma H. Essenmacher. Tim married Paula Wheeler on April 5, 1987. Tim was a member of 4H, served in the United States Air Force, was a member of the Knights of Columbus, the Paw Paw River Jeep Club, and was a Jack Daniel’s Squire. Tim was a Radio Technician for the Michigan State Police. Tim is survived by two children, Tony (Stella) Essenmacher and Jessica (William) Blake; two grandchildren, Luna and Mars; his mother, Norma H. Essenmacher; three brothers, Jerome (Patti) Essenmacher, Andrew (Dawn) Essenmacher and Philip (Kelly) Essenmacher; two sisters, Catherine (Gary) Comfort and Margie Bhatt; twenty three nieces and nephews. He was preceded in death by his father, Jerome G. Essenmacher and his brother, Steven Essenmacher. Funeral Mass will be held at 11 A.M. on Monday, January 6, 2020 at the Ave Maria Parish-St. Denis Catholic Church in Lexington. Visiting will be from 10-11 A.M. at the church. Fr. Donald J. Eppenbrock will officiate, followed by a luncheon at the St. Denis Hall where picture boards will be displayed, followed by a procession to the farm and to New St. Marys Cemetery for the committal service and military honors provided by the Croswell American Legion.

The family of Timothy John Essenmacher created this Life Tributes page to make it easy to share your memories.

Send flowers to the Essenmacher family.