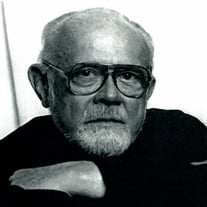 Wallace “Wally” Witkowski, age 91, of Carsonville, made his transition into the arms of Love on Wednesday, August 28, 2019, at his home in his beloved Witkowski Woods. He was a retired federal government attorney, Polish translator, and World War II member of the Polish Underground. Mr. Witkowski was decorated for his activities in the Underground by the Polish government in exile in London, and by the first post-communist Polish President Lech Walesa. He was born January 12, 1928, in Kielce, Poland, the son of the late Ludwig and Helena (Majcherczyk) Witkowski. In 1949, he escaped from Communist Poland and came to Detroit. He was a radio announcer and news commentator on Detroit’s WJLB Polish Language Program. He earned a BA (1954) and Juris Doctor (1956) from Wayne State University. He was in private law practice from 1956 to 1962, was active in Polish-American organizations and was appointed to the Detroit’s Community Relations Commission by Mayors Miriani and Cavannaugh. In 1962, he was appointed to the legal staff of the Foreign Claims Commission (FCSC) of the State Department in Washington, D.C. From 1966 until retirement in 1994, Mr. Witkowski worked for the Federal Trade Commission (FTC). From 1973 to 1976, he was sent by the US government to Micronesia (US Trust Territory of the Pacific Islands), as Vice-Chairman of the US War Claims Commission in the Mariana Islands. He returned to Washington and continued to work for the Federal Trade Commission until retiring in 1994. In Virginia, Mr. Witkowski had been active in the St. Charles Borromeo Parish of Arlington, Virginia, as a “Renewal” leader and a supporter of the Borromeo Housing and medical missionary work in Haiti. In September 1998, Mr. Witkowski moved his retirement home to Sanilac County, Michigan, where he continued to write, translate, and volunteer for the Sanilac County Humane Society. Mr. Witkowski collaborated the first, complete, Polish translation of “A Course in Miracles”, a well-known metaphysical Christian teaching. He was also a volunteer translator for the US Holocaust Memorial Museum and a contributor to its Archives Department. Wally is survived by three adult children: son, Matthew J. Witkowski (Jane Inge) of Palmyra, Virginia, a retired cinematographer and video editor; Krystyna (Krysia) B. Witkowski of Norfolk, Virginia, a physical therapist and owner of Integrative Manual Therapy & Wellness; and Helena (Halusia) E. Witkowski (Dale Lewis), of Carsonville, Michigan, psychotherapist and owner of Lakeshore Therapy Counseling Offices; as well as grandchildren Jesse Inge-Witkowski, Ethan and Avery Branum; beloved cousin and lifelong companion and friend, Maciek Gasiorowski, and many friends and family in Poland, England, Canada and Switzerland. Wally is remembered with love by Marsha Gransee-Conway (John Conway) of Virginia; Jan Lindsey of Florida; and Mary Flanagan of Virginia. He was preceded in death by his beloved sister, Halina Margaret Witkowski, and daughter, Elizabeth “Liz” Witkowski. Wally lived the quintessential American immigrant success story, coming to this country with very little, receiving citizenship, educating himself, working for the betterment of American society, and raising a family of four children - all who obtained Master’s Degrees, and three children of whom owned their own businesses. A celebration of the life of Wally Witkowski will be held at the St. Mary’s Catholic Church in Port Sanilac, Michigan, September 7, 2019 at 11am with luncheon to follow. In memoriam, donations may be made to the Sanilac County Humane Society of Carsonville, Michigan; Project Blessing of Carsonville, Michigan; or to the Queen of Heaven Catholic Church- Falalop Island, Ulithi, Federated States of Micronesia.

Wallace &#8220;Wally&#8221; Witkowski, age 91, of Carsonville, made his transition into the arms of Love on Wednesday, August 28, 2019, at his home in his beloved Witkowski Woods. He was a retired federal government attorney, Polish translator,... View Obituary & Service Information

The family of Wallace "Wally" Witkowski created this Life Tributes page to make it easy to share your memories.

Wallace “Wally” Witkowski, age 91, of Carsonville, made his transition...

Send flowers to the Witkowski family.