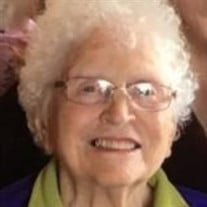 CARSONVILLE- Wanda E. Hayes, age 96, a resident of Carsonville passed away on Wednesday, April 28, 2021 at her residence in Carsonville. She was born on August 8, 1924 in Carsonville, one of eight children born to the late Ernest and Rose (Leonard) Meyers. Wanda married Wm. Hugh Hayes on December 4, 1943 in Sandusky and he preceded her in death after 44 years of marriage on September 10, 1987. Wanda later married Clifford Wallace on November 10, 1988 in Carsonville and he also preceded her in death on August 20, 1996. Wanda, her sister and mother all worked in a factory and were “Rosie the Riveters”, doing their part to help with the war effort during WWII. Wanda was a graduate of the Sandusky High School and went on to become an LPN. She was a practicing OBGYN Nurse at the Wm. Beaumont Hospital in Royal Oak for over 20 years. She was a member of the Carsonville United Methodist Church; a volunteer with Project Blessing in Carsonville since its inception over 40 years ago. Wanda loved to play various card games with family and friends and was still winning at the age of 96. Years ago she also enjoyed a good game of Scrabble. She Liked watching football and the Wheel of Fortune, she also enjoyed reading and loved her books. The most important things to Wanda, were her family and the family reunions, her church and Project Blessing. Wanda is survived by her 5 children, Bill (Barbara) Hayes of Clawson, Ray Hayes of North Branch, Dolores Hayes of AZ, Don (Linda) Hayes of Washington Twp., and Rhonda Miller of Carsonville; 16 grandchildren and 28 great grandchildren; 1 brother, Dale Meyers and 1 sister Virginia Glacz; several nieces and nephews. She was preceded in death by two infant daughters at birth Roxanne and Lucinda; her son-in-law, Ric Miller, daughter-in-law Linda Hayes and four brothers, Eugene Meyers, Roger Meyers,Elwyn Meyers and Wayne Meyers; one sister, Loretta McKee. Visitation will be from 2-5 P.M. on Saturday, May 1 at the Pomeroy Funeral Home in Carsonville. Funeral services will be held at 2 P.M. on Sunday, May 2 at the funeral home , with visiting from 1-2 P.M. Rev. Jerry Griggs of the Carsonville United Methodist Church will officiate. Interment will be in the Washington Cemetery. Memorials in memory of Wanda may be made to Project Blessing in Carsonville, Michigan.

CARSONVILLE- Wanda E. Hayes, age 96, a resident of Carsonville passed away on Wednesday, April 28, 2021 at her residence in Carsonville. She was born on August 8, 1924 in Carsonville, one of eight children born to the late Ernest and Rose (Leonard)... View Obituary & Service Information

The family of Wanda E. Hayes created this Life Tributes page to make it easy to share your memories.

Send flowers to the Hayes family.