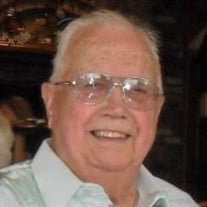 Former Mayor of Croswell- Wesley Cook, 93 of Croswell and Ormond Beach, FL died Dec. 21, 2017 in Daytona Beach, after a short illness. He was born Dec. 24, 1923 in Watertown, MI to the late Ira & Myrtle (French) Cook. He graduated from Croswell High School in 1941. He proudly served his country in WW II from April 1943 to December 1945. He served in the European Theatre of Operations, earning five battle stars for his participation in the Normandy Invasion, the Battle of the Bulge, and other major battles in north and central Europe. They saw action in France, Belgium, Holland, and Germany. He married Bette Rae (Griffith) Weller on March 10, 1948 in Bowling Green, Ohio, and was looking forward to celebrating their 70th wedding anniversary this March. After the war, he owned and operated the “Standard” gas station in Croswell. He later sold cars for Lindke Auto Sales in Croswell for a number of years. He obtained his insurance license and in 1960 founded the Wes Cook Insurance Agency which he ran until his retirement in 1985. He served on the Croswell City Council from 1960-1976, serving as Mayor from 1966-1976. He continued his service to the City of Croswell, resigning his position on the Zoning/Planning Commission in 2016. Throughout his life he was involved in many organizations. He was a Life Member of the American Legion Post 255 and served for many years on the Sanilac County Veterans Trust Fund board. He was active in many fraternal organizations including Life Member of Croswell Lodge #469 F & AM, Commandery, Royal Arch Masons and El Khurafeh Shrine. He was also an active member of the First Presbyterian Church. He and Bette loved to travel and took many trips to Europe. They also spent many winters in the Rio Grande Valley of Texas before they began spending them in Florida. They loved to dance and over the years could be found at numerous Octoberfests, polka parties and square dances. He looked forward to attending army reunions that spanned nearly 70 years and 5 different states. Even though the numbers dwindled in attendance they still continued to meet. The last reunion was in 2016 with only two in attendance. Wes is survived by his wife, Bette Rae; his children James (Sue) Weller of Lexington, Jerry (Joann) of Deckerville, Jane McLane of Croswell , and Janice Danielson of Ludington; his sister, Marie Archambault of FL; and his grandchildren Debbie (Aaron) Jolley, Steve (Sharon) Cook, Dennis (Cathy) Cook, Mike McLane and Julie McLane, five step great grandchildren and many nieces and nephews. He was preceded in death by his brother Merle, his sister Wanda Studaker and his grandson Jimmy Weller; his son in law, Bob Danielson and step great grandson, Matt Kocan. Those who so desire may make memorial donations in memory of Wes to the family for the purchase of park benches or flag poles for the City of Croswell. Visitation will be held on Tuesday, May 22, 2018 from 2-8 P.M. at the Pomeroy Funeral Home in Croswell. A Masonic Service will be held at 7 P.M. Tuesday evening. Funeral services will be held at 1 P.M. on Wednesday at the First Presbyterian Church in Croswell, with visiting from 12 Noon until 1 P.M., Elder Don Wixson of the First Presbyterian Church will officiate. Military Rites will be provided by the Croswell American Legion PosT #255. Inurnment will be in the Croswell Cemetery.

Former Mayor of Croswell- Wesley Cook, 93 of Croswell and Ormond Beach, FL died Dec. 21, 2017 in Daytona Beach, after a short illness. He was born Dec. 24, 1923 in Watertown, MI to the late Ira & Myrtle (French) Cook. He graduated from Croswell... View Obituary & Service Information

The family of Wesley Cook created this Life Tributes page to make it easy to share your memories.

Send flowers to the Cook family.